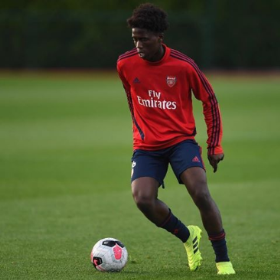 Allnigeriasoccer.com can exclusively report that Premier League club Arsenal have parted company with Nigerian wonderkid Malcolm Ebiowei.
What this means is that the attacking midfielder will not sign a scholarship deal with the Emirates Stadium outfit ahead of the 2020-2021 season.
Arsenal's decision to release Ebiowei will come as a shock to everyone associated with the club as the Nigerian starlet is widely regarded as one of the best prospects in the U16 team, if not the best, so much so that he was handed a debut for the U18 team in August 2019 despite being a schoolboy.
While it is confirmed that Ebiowei had disciplinary issues with the Gunners, it is unclear at this point whether or not he was asked to look for a new employer because he attended a Nigeria U17 training camp in Turkey towards the tail end of September.
Despite linking up with the Golden Eaglets late and coach Manu Garba earmarking him as a future Nigeria youth international, the midfielder is still hopeful of gatecrashing the 2019 World Cup squad.
One thing is certain, Ebiowei will not be lacking suitors within England as he is highly thought of by Premier League clubs.
Ifeanyi Emmanuel
Photo Credit : instagram.com/malcolmebiowei