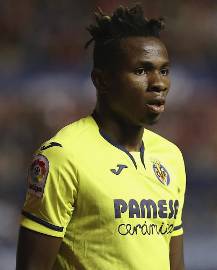 Super Eagles winger Samuel Chukwueze was in action for 90 minutes Saturday evening in Villarreal's 2-1 away defeat to Osasuna at the El Sadar Stadium but it was his error that led to the hosts' second goal that drew the attention of his manager Javier Calleja and Spanish journalist Tony Pattia.

As Villarreal played out the ball from the back, it was soon at the feet of the Nigerian but he was dispossessed of the ball by an opponent which eventually led to Ezequiel Avila's match winning goal for Osasuna.

Villarreal head coach Calleja summed up his frustration in his post match reaction.

"We had the chance to increase our lead. We knew its going to be a difficult place to come.

"At the start of the second half, they scored a great goal and it was through our mistake, the ball given away (in reference to Chukwueze giving away the ball).

"We did try to score an equaliser but we didn't take our opportunities. We wish our Spanish players and Samuel well in the international break. Its the reward for our good work. I wish them good results," Calleja whose team are ninth in the table said.

"Santi Cazorla and Javier Moreno are the most important attacking Villarreal players and should have seen more of the ball but in the second half they disappeared.

"Samuel (Chukwueze) was a good choice for this game because it was going to be physical but they did not click in the second half.

"The attitude of Osasuna in the second half was amazing. Villarreal's defence was very poor. Attacking wise they were good," the analyst went on.