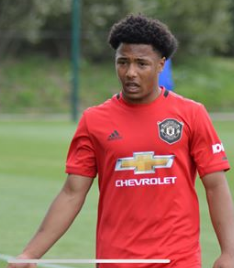 Nigeria-eligible youngster Dillon Hoogewerf has spoken of his happiness after scoring his first brace for a Manchester United team on Saturday.
The former Ajax Amsterdam wonderkid was influential as United staged a remarkable comeback against Newcastle United in the U18 Premier League, coming from two goals down to earn a 5-2 victory.
Hoogewerf powered home a header to make it 2-1 in the 37th minute and nine minutes into the second half the striker completed the turnaround when he found the net with a close range effort from six yards.
A first-year scholar, he has had an encouraging start to his career at Old Trafford and will fancy his chances of getting a promotion to the U23 team given that he has made the matchday squad for their last four games in the Premier League 2.
Writing on Instagram after the game, Hoogewerf said : ''Happy with my two goals today and happy with result and the team effort👌🏽''.
He has been named in the latest Netherlands U17 squad and is expected to report for international duty on Monday 7 October in Mierlo ahead of a potential competitive debut for the European nation.
Igho Kingsley
Photo Credit : manutd.com