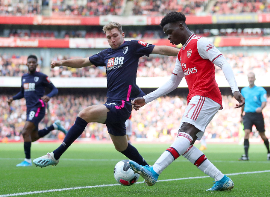 Arsenal defeated Bournemouth 1-0 at the Emirates stadium in their Match day 8 game to move up to third in the English Premier League table and Bukayo Saka turned in a great performance in the slim victory.

As usual the media were at hand to rate the Arsenal players after the match and these are what they had to say.

Football.London whose reports focus on the London based clubs in the English Premier League gave an insightful assessment of the contributions of the Nigerian forward.

"When Emery talks about an Arsenal team defined by "energy and high-pressing" you can see exactly how Saka fits in.

"As against Manchester United he throttled the opposing left-back with defensive acumen and ensured that Sead Kolasinac was not overrun on his flank. 7."

"Bukayo Saka. 6. A third successive bright and encouraging Premier League start."
For  90mins.com simply reeled out the numbers and handed Saka a 6/10 but did write the following about the Nigerian and the other Gunners' forward players.

"Arsenal might be known for their ability on the ball, but forwards Pierre-Emerick Aubameyang, Bukayo Saka and Nicolas Pépé worked tirelessly off it with their pressing on Sunday to force Bournemouth into mistakes.

"Unai Emery's side were helped out by Bournemouth's passiveness throughout the game, but Arsenal maintained their momentum and always looked to keep the Cherries on the back foot.


"The Gunners were also uncharacteristically dangerous from corners throughout, and although Arsenal hardly put on the best of displays for their supporters, they did just about enough to clinch three points and move up to third place."
Arsenal Station rated Saka  7/10.
"Saka 7/10. In and out the game at times but lively when he was on the ball.

"Confident and always trying to beat his man. Worked hard to close the Bournemouth defence down too."