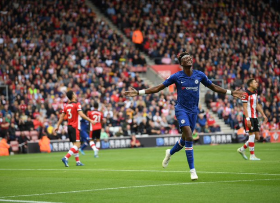 European giants Real Madrid have identified Tammy Abraham as a transfer target if they fail with an offer for Tottenham Hotspur's goal machine Harry Kane, according to reports.
Don Balon claims Los Blancos supremo Florentino Pérez is not satisfied with the performance of attack-minded trio Eden Hazard, Gareth Bale and Karim Benzema in the new season despite the fact the capital outfit top the table heading into the international break.
Real Madrid's primary target is Kane but his price is excessive at 200 million euros and Tammy Abraham has been viewed as a cheaper alternative to the England captain by the president.
Abraham has been a key player for Chelsea this season after he was brought into the first team fold by manager Frank Lampard as a result of the two-window transfer ban by FIFA.
The 22-year-old's statistics have caught the eye, with nine goals in 11 matches across all competitions and he's the top scoring Englishman in the Premier League so far this season.
With Chelsea set to reward Abraham with a new five-year deal in the coming days, the former England U21 international won't come cheap if Real Madrid make a bid for his services next summer.
Ifeanyi Emmanuel
Photo Credit : chelseafc.com