...the complete Nigerian football portal
Subscribe
Emenalo Reveals He Fought Against Chelsea Academy From Being Shut Down
Published: October 08, 2019 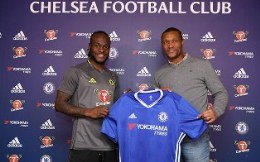 Former Chelsea technical director Michael Emenalo has revealed how he fought against Chelsea Academy from being shut down after an unnamed manager attempted to persuade Roman Abrahamovich to stop funding the academy.
The 1994 Nigeria World Cup star was technical director of the Blues from 2011 to 2017, and worked with André Villas-Boas, Roberto Di Matteo, Rafael Benítez, Guus Hiddink and Antonio Conte during his time with the club.
With Chelsea hit with a two-window transfer ban by FIFA, manager Frank Lampard has brought academy products Tammy Abraham, Fikayo Tomori and Mason Mount into the first team fold, while the likes of Andreas Christensen, Ruben Loftus-Cheek, Callum Hudson-Odoi and Reece James played for the academy before they were promoted to the first team.
''I defended the academy when there was pressure and doubt and pessimism,'' Emenalo told The Telegraph,

''There was a time when there was a clamour to do more and a manager came in to make a presentation to say the academy was not necessary.

''The argument was it takes too long, we don’t have time, we should use it to make some money here and there, and that the owner should stop pumping money into it because it seemed like a waste.''
He continued : ''But that wasn’t my idea and I had to fight against it.

''This is where I am very, very proud of the owner Roman Abramovich because of the trust he had in me and the willingness to listen to me and give the academy time.

''He would not abandon it. He believed in it and in me, and I can’t thank him enough for that.''
Emenalo officially left his role as Monaco sporting director by mutual consent in August 2019.
Igho Kingsley
Photo Credit : chelseafc.com