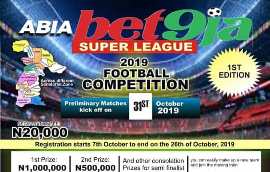 In a bid to put together a remarkable football competition, Agents of Bet9ja in Abia state have engaged the services of Myron Topclass Sport Outfits to act as a consultant for a successful grassroots football tournament which is scheduled to hold across the 3 Senatorial Zones, Abia North, Abia South and Abia Central the Abia State.
Speaking after a brief meeting with officials of Myron Topclass Sport Outfits,  Board Member of the Abia State Football Association and one of the Bet9ja Representatives, Engr Kelechi Nnorom Orji said "we saw the passion  exhibited by Myron Topclass Sport Outfits principal Officer,  Mr. Eddie Iseri Ogbemudia, who is doing a splendid job in the Bet9ja Royal Cup currently on going in Delta State. He has proven his capacity and has volunteered to bring in his wealth of knowledge to actualize the dream of discovering the next set of exceptional footballers in Abia State.
Also Speaking Mr. Eddie Iseri Ogbemudia said "Sincerely I return all glory to God almighty, they say the reward for doing a good job is more work, I'm excited that the bet9ja agents in Abia State saw what we are currently doing in Delta State with the ongoing Bet9ja Royal Cup 2019 Grassroots Football competition across the 25 LGA in Delta State, and they have to bring us in, I want to use this medium to assure them that our company Myron Topclass Sport Outfits has the requisite manpower to give them a befitting tournament".

"We will contribute our bit to make it a success, we are looking at the possibility of bringing some scouts to come watch some of these games to identify some key players that are ripe enough to be developed and moved to clubs where they can pursue a career in football."

Interested teams are expected to register with N20,000 and pick up forms from 1st to 25th October 2019 at any Bet9ja shop in Abia State to participate in the football competition which is scheduled to kick off 1st November 2019 with a qualifying series, to produce 16 teams from the three Senatorial Zone

A group of four teams will then emerge and subsequent progression will follow to battle for the mouth watering prizes: Winner N1,000,000 1st Runner-Up N500,000 and other consolation prizes.