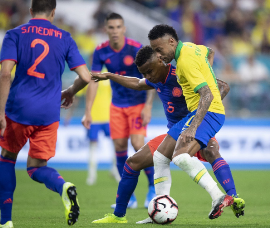 Ahead of the eagerly anticipated friendly between the Super Eagles and Brazil, it could be interesting to take a peek at some of the opposition players who will most likely be Tite's secret weapon in Singapore.
The Seleção will be hurting after seeing their 17-game unbeaten run halted by Peru last time out and though they have the business of facing Senegal just before Nigeria, they will want to take some measure of pride by besting two of the best countries in the continent.
Below are five of these players who could be strutting their stuff on Sunday against Gernot Rohr's team,

Neymar Junior: Unarguably the biggest name on the Brazil roster for this weekend's games. The Paris Saint Germain attacker is blessed with some talent and has always shown thus on the field of play, as his four league goals in five games already depicts.

Should he get some minutes versus the Super Eagles on Sunday, William Troost-Ekong and Co. will have their hands full stopping the record-chasing star who is the third highest goalscorer for the Brazilian national team, having struck 61 goals in 99 matches, just one behind the legendary Ronaldo (62 goals in 98 games).

Fabinho: Another player to watch out for on Sunday will be Liverpool's midfielder Fabinho.

A seasoned performer at top level football, the 25-year-old has become a household name in the English Premier League and is one of his manager's trusted hands, for both club and country.

He is most likely to be deployed from the off against Nigeria and will be tasked with orchestrating his team's play from deep.

Renan Lodi: Lodi has seen his stock rise recently after making the jump from Athletico Parana in the Brazilian league to join Diego Simeone's Atletico in La Liga for whom he has churned out some eye-catching performances this season.

Adept at playing on either flanks of the defensive line, the 21-year-old is well known for his marauding runs into the opposition box.

Gabriel Barbosa: Gabriel is Neymar's trusted deputy. When he is not scoring the goals himself, he could be tucking off and harrying the defenders and laying them on.

His numbers in the Brazilian Serie A makes for grim reading for opposing defenders, as he is averaging one goal per game (18) he has played for Flamengo this season.

Richarlison: And rounding off our most likely thorn-in-the flesh Samba Boys will be Everton's striker, Richarlison who will be meeting his club pal, Alex Iwobi at the Singapore national stadium for this one.

He is a willing enough worker for his team and his skillset is not particularly down to plundering the goals but also his capability to take on opponents with his searing pace.

The 22-year-old striker who has scored thrice for his club this season could be leading the lines for his side on Sunday.