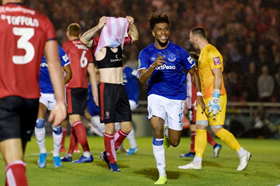 Former Leeds United striker Noel Whelan believes Alex Iwobi is a bigger attacking threat than Everton's Brazil striker Richarlison and is backing the Super Eagles star to save Marco Silva's job.
Silva's chances of being fired have increased after the Toffees suffered their fourth successive loss in the Premier League last weekend at Burnley.
Iwobi has made three Premier League starts since joining Everton from Arsenal in the summer and has caught the eye, while his Brazilian teammate Richarlison is lacking form and consistency having failed to find the net in his last five games across all competitions.
Speaking to Football Insider, Whelan said : ''He was the most effective Everton player against Burnley at the weekend.
''He’s got the pace and ability to beat players and create chances, and that’s something they’re lacking at the moment.
''Richarlison looks like he has lost confidence and belief in himself, and Iwobi is a bigger threat.
''He’s a brilliant talent, he just needs to find more consistency and better decision-making. The raw skill and ability is there.

''If he starts to realise his potential, he can keep Silva in his job.''
Richarlison and Iwobi are expected to be in action for their respective countries in Sunday's prestige friendly between Brazil and Nigeria at the National Stadium in Singapore.
Ifeanyi Emmanuel
Photo Credit : evertonfc.com