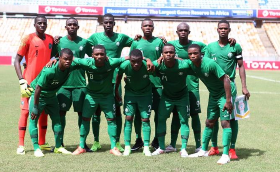 Allnigeriasoccer.com can exclusively report that Nigeria U17 coach Manu Garba has sensationally axed Sidos Football Academy midfielder Olatomi Alfred Olaniyan from his World Cup roster.
Olaniyan was one of the key players at the U17 zonal qualifiers held in Niger in September 2018, scoring against Ivory Coast and also featured in the U17 AFCON, where he had the honour of being the first player to score for the Golden Eaglets in a 5-4 win vs Tanzania.
There is a little bit of confusion over his axing as it has been claimed that Manu Garba decided to erase his name from the World Cup squad because he was nursing a knee injury.
The official word is that the coach was advised by the medical team not to risk naming Olaniyan on the roster because he would not have fully recovered from the injury before the start of the World Cup.
Allnigeriasoccer.com has been doing some digging to unravel the mystery behind the midfielder not making the squad list to Sao Paulo and it can be revealed that some naysayers raised dust that he was over the age of 17 and had played in a University competition few years ago.
Meanwhile, Olaniyan's teammate at Sidos FC, Akinkunmi Amoo has traveled with the team to Brazil.
Dubbed 'Little Messi' by his Golden teammates, he shone at the U17 zonal qualifiers and also impressed in Tanzania despite playing through the pain barrier.
Ifeanyi Emmanuel