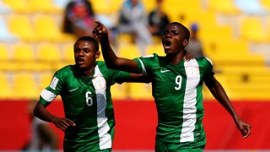 Four years ago in a packed Estadio Sausalito, Viña Del Mar in Chile during the U-17 World Cup, Nigeria claimed arguably one of the biggest youth football scalp, doling out a 3-0 trouncing to Brazil and that game had some interesting facts which will get Nigerian fans excited even as their senior teams prepare for their high-profile friendly on Sunday.
With a semifinal spot up for grabs, Victor Osimhen and Samuel Chukwueze inspired the Golden Eaglets to stun Brazil with three goals in five first half minutes, thus sealing the huge victory.

The Lille star opened the floodgates after 29 minutes before laying on another for Bologna's Kingsley Michael a minute later.

Villarreal's Chukwueze will eventually join in on the act of tormenting the Brazilians, assisting Udochukwu Anumudu's third with a bit of brilliance on the night to have the Nigerian fans in jubilant mood.

Both players are yet in Gernot Rohr's team for the upcoming game in Singapore and could be useful assets for the side if they will hope to come good.

Coincidentally, Real Madrid's defender éder Militão who could be handed game time by Tite against the Super Eagles on Sunday started for the young Sëlecao in that rout, logging all ninety minutes but could not help his side prevent the defeat.