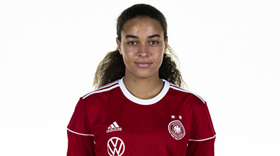 Allnigeriasoccer.com understands that the German Football Association are set to battle it out with the Nigeria Football Federation for the services of Bayern Munich goal machine Melissa Ugochukwu.
Although she has a German passport, Ugochukwu has Nigerian background through her father's lineage.
Since debuting for Bayern Munich's U17 team in the 2017-2018 season, the 2003-born striker has been involved in 37 games in the B-Juniorinnen U17 Bundesliga Süd, scoring an impressive 19 goals.
Ugochukwu has not been capped by Germany but she is believed to be on the radar of the German Football Association, having represented Bayern's regional selection.
The most notable player of Nigerian descent to represent Germany's Women's teams is Navina Omilade-Keller who won the Champions League with Wolfsburg in 2013 and Ugochukwu could follow in her footsteps if she is not convinced to pledge her allegiance to the Super Falcons.
Super Eagles defender Leon Balogun was eligible for Germany before becoming cap-tied to Nigeria.
Karim Adeyemi, Kevin Akpoguma, Felix Uduokhai, Jordan Torunarigha and Emmanuel Iyoha have earned competitive caps for Germany's youth teams but remain eligible to turn out for the Super Eagles.
Ifeanyi Emmanuel
Photo Credit : dfb.de