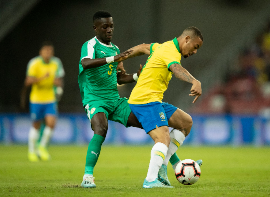 But Famara Diedhiou pulled the Teranga Lions level just before half-time, converting from the spot after Mane was fouled by Marquinhos in the area.

Both teams had chances to find a winner in the second chance but passed up their chances.

Nigeria will now attempt to match Cameroon's feat of been the only African team to beat the Selecao when they meet on Sunday at the same venue, with the game starting from 13:00 hours.

The Super Eagles held their first training session on Singaporean soil on Thursday.