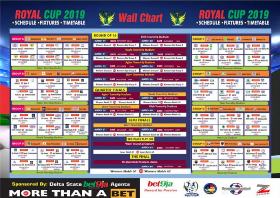 The fixtures for the group phase of the 2019 Bet9ja Royal Cup have been released, with the action kicking off on Monday, October 14, 2019 across all centers in Delta State.

At the Agbor Township Stadium, Unity FC of Asaba will take on highly rated Rolly FC of Koko in the opening Group B cracker by 10am, just as in Group A the riverine boys of Selected All Stars FC of Patani will thereafter lay a land ambush for Young Stars FC by 12noon.
Victorious FC will go outrightly in the Group C opener at the Kwale Township Stadium against Golden Friends FC by 12noon, but before the preceding tie at that venue, De Unique FC will file out against Young Professionals in Group D by 10am.

The Oleh Township Stadium will have its curtain raiser when Delta Warriors FC lock horns with Osevan FC of Kwale in Group E by 12noon and highly motivated Partakers FC of Agbor will play Jeremi United in the Group F opener by 2pm.

The hostilities will resume at the Warri City Stadium by 10am when God's Project FC will unleash their goal scoring machine, Harrison Chukwuji, on MWF De Titans FC of Abraka in Group H, while in Group G Delta Eagles of Ozoro will entertain Golden Albion FC by 12noon.

On Tuesday, October 15, 2019, more games will be witnessed in some centers. FC Galaxy will open their Group C campaign against Ihun Iyase FC of Agbor by 12noon at the Kwale Township Stadium.

At the Warri City Stadium, All Stars International FC will tackle the unsung heroes of Ekete United in Group G by 10am, as Mega Stars will hope their golden front line will come to the party when the Asaba club clash with Young Shall Grow FC in Group H by 12noon.

The final set of opening group fixtures will feature on Wednesday, October 16, 2019, with Sundof Academy playing Bobbies United of Warri in a Group A tie at 12noon and Visionaries FC taking on Henfield Academy in Group B earlier in the day by 10am all at the Agbor Township Stadium.

Experience and youth will be put to test when two high flying teams, Ede United and Maro11 Speedstar Academy, meet at the Kwale Township Stadium in Group D.

The epic encounter will kick off at 10am.

The 2019 Bet9ja Royal Cup began on September 14, 2019 with local government area qualifiers involving 108 clubs, with 32 teams making it to the group phase after producing over a hundred goals in 77 games.