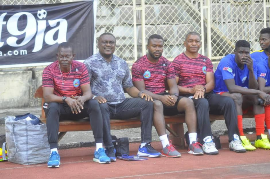 The new technical adviser of Warri Wolves, Evans Ogenyi, has said that the club is a work in progress ahead of the commencement of the 2019/2020 Nigeria Professional Football League, NPFL.

Ogenyi, who made this assertion after the Seasiders were pipped 1 - 0 by Heartland FC at the Okigwe Stadium on Thursday, October 10, 2019, said it is quite commendable that the club are using the preseason window to play good friendly quality teams in the country.

On last Thursday's friendly against the Naze Millionaires, the experienced gaffer stated that the two teams have character, adding that both sides proved that they are among the best in domestic football.

He noted that his side have not attained the level they want to be for the league yet, stating that they would continue to work and fine tune all grey areas before the NPFL campaign commences in earnest.

"The two teams I want to say that they have character," said Ogenyi. "They are a work in progress."

"For my team, we are not there yet. We will continue to work hard and fine tune all grey before the league starts."

"I commend management for making arrangement for quality friendlies with good teams in the league."

Ogenyi urged all Warri Wolves supporters to continue to rally around the team, assuring them that they would give a good account themselves during the forthcoming season.

Warri Wolves will play host to Heartland FC at the Warri City Stadium on Sunday, October 13, 2019 by 4pm in the revised fixture of this friendly game.