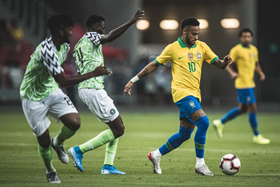 The Super Eagles played out a thrilling 1-1 draw with the Sëleçao of Brazil in their friendly encounter on Sunday.
Allnigeriasoccer.com's Emmanuel Chinaza brings readers the performance data of the Super Eagles players on the day, thus,
The Starters
Goalkeeper

Francis Uzoho: Produced series of top drawer save to keep the Super Eagles in it and looked spirited in between the sticks. Could do little to stop Casemeiro prodding home the equaliser after his defence failed to clear the lines. (8/10)

William Troost-Ekong: Ably shielded and covered any lapse and final balls into the box for his team.

Was caught in no man's land for Casemeiro's equaliser. (7/10)

Semi Ajayi: Did admirably well in the rear and carried the ball with poise and confidence. Arguably his team's best defender. (7.5/10)

Chidozie Awaziem: Tracked back well and did his defensive share of the work. (7/10)

Jamilu Collins: Defended brilliantly for much part of it but struggled coming up against Renan Lodi in the second half. (6/10)

Wilfred Ndidi: Battled hard down the middle and was up for it. Tried a couple of shots from range and was a defensive presence for his team. Booked for his efforts. (7/10)

Joe Aribo: One of the star players for the West African side. Bossed possession whenever he got on the ball and never shied away from the battle. Mopped up the tension of the game from box to box, and his eye-catching goal capped off his display. (8.5/10)

Alex Iwobi: Kept his contribution very simple and didn't really unlock the opposition defence as expected. His creativity was another issue too. (5/10)

Moses Simon: Willing worker down the left flank. Forced back Daniel Alves for much of the first period before setting up Aribo for the opener. (6.5/10)

Samuel Chukwueze: Looked dangerous on the break and was full of running with the ball to foot. Had the opposition defence on the ropes with his trickery and curled wide some efforts. (6.5/10)

Victor Osimhen: Proved a real nuisance with his built and pace, harrying the duo of Marquinhos and Silva all through.

Forced a decent save from Ederson and was pivotal in his team's opener. (7/10)

Maduka Okoye: Replaced Uzoho following his injury and was unfazed on his debut, even though he might not have been properly tested. (5/10)

Paul Onuachu: Came on for Osimhen and did well. Held up play with his built and even chipped in defensively. (6/10)

Dennis Emmanuel: Saw little chance to run at the retreating Alves after coming on. (5/10)

Ramon Azeez: Thrown in for Iwobi to help stem the foray of the Sëleçao as the clock wound down.