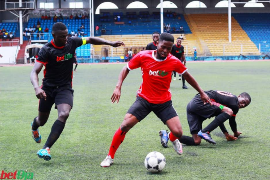 Group stage action began on Monday, October 14, 2019 in this year's edition of the Bet9ja Royal Cup, with a game played in each of the groups.


Rolly FC were in their fine element in their Group B tie against Unity FC of Asaba at the Agbor Township Stadium, as they scored three goals under the first 17 minutes of the tie to beat the Asaba-based club 3 - 0.
In Group A, the riverine boys of Selected All Stars FC of Patani suffered a 3 - 2 casualty in their land ambush against Young Stars FC of Ossisa.

Few kilometers away at the Oleh Township Stadium, Delta Warriors and Osevan FC settled for a 1 - 1 draw in Group E, just as a stubborn Jeremi United side in the second game of the day claimed 2 - 1 victory over Partakers FC of Agbor in Group F.

The clement Monday weather condition in Warri ensured that games were played at the City Stadium, with God's Project FC coming from a goal down in the early exchanges to beat MWF De Titans 2 - 1 in Group H.

While in the second tie there, an Alex Okachi's hattrick helped Delta Eagles of Ozoro to run away with a 4 - 3 win against Golden Albion of Udu in Group G.

More group games will be witnessed in some centers on Tuesday, October 15, 2019.

FC Galaxy will open their Group C campaign against Ihun Iyase FC of Agbor by 12noon at the Kwale Township Stadium.

At the Warri City Stadium, All Stars International FC will tackle the unsung heroes of Ekete United in Group G by 10am, as Mega Stars will hope their golden front line will come to the party when the Asaba club clash with Young Shall Grow FC in Group H by 12noon.