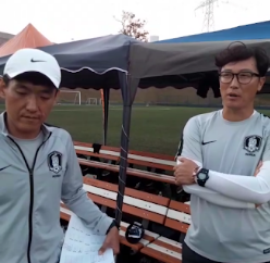 South Korea U17 boss Kim Jung-soo heaped praise on the Golden Eaglets following his side's 4-2 defeat suffered at the hands of the five-time world champions on Wednesday evening.
Olakunle Olusegun enhanced his growing reputation by scoring a brace for Nigeria while Divine Nwachukwu and Charles Etim also found the net.
Coach Jung-soo confessed that he has been keeping tabs on the Golden Eaglets and revealed that speed and skillfulness are two of their qualities.
Speaking through an interpreter, Jung-soo said after the friendly : ''We are actually happy that we have the problems that we can solve until the start of the tournament, so we have like ten days left to solve the problems.

''The Nigeria team is one of the best teams in U17 tournaments. I watched some of their match videos and they are very skillful and speedy''.
Nigeria could face Japan in another friendly before their opening game against Hungary at the 2019 FIFA U17 World Cup.
Ifeanyi Emmanuel