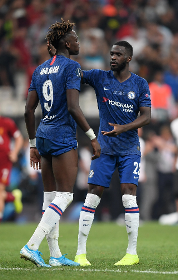 Fikayo Tomori's passing skills have been highlighted by football statisticians Whoscored.com.
The Nigeria target has averaged more passes (75.6) than any other player in the Chelsea squad in the Premier League alone and only Manchester City defender Nicolas Otamendi (76) has a better average than the Canadian-born center back.
Having remained an unused sub in the first three games in the top-flight, Tomori has forced his way into The Blues starting line-up, going the distance in their last five games.
He racked up 99 passes on his full Premier League debut against Sheffield United, recorded 69 passes vs Wolves, Liverpool 52, Brighton & Hove 90 and Southampton 68.
Tomori opened his account in the Premier League against Wolves, a goal which was shortlisted for the Budweiser Goal of the Month award but lost out to Southampton's Moussa Djenepo when the winner was announced.
The 21-year-old was rewarded with a maiden call-up to the England senior team for the Euro qualifiers against Czech Republic and Bulgaria and was an unused substitute in both games, making him eligible to play for the Super Eagles for the time being.
Ifeanyi Emmanuel
Photo Credit : chelseafc.com