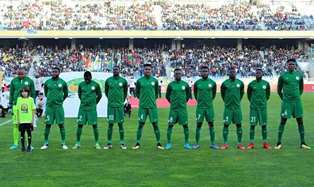 Former Super Eagles defender Isaac Semitoje has expressed concerns over the unenviable task of the home based Super Eagles overturning the 4-1 first leg defeat against the Hawks of Togo in their Africa Nations Championship (CHAN) 2020 qualifiers.
Imama Amapakabo's side held their last training session on Friday morning and Semitoje spoke to allnigeriasoccer.com as the game which will be the third meeting within a month for both side beckons.

Togo won the first leg qualifying match and  also defeated the same Nigerian side in the WAFU Cup.

"It's all about the team and not the head coach or players. I hope that with the trainings and camaraderie among them, they are getting better," Semitoje who was a member of the Super Eagles team that won the AFCON in 1994 said.

"Should they survive Togo and make it to the CHAN, that will be massive and hopefully with time, they will understand themselves. We just hope so," the onetime Iwuanyanwu Nationale (now Heartland FC) captain further told allnigeriasoccer.com.

The crucial game will kick off 4pm at the Agege Stadium, Lagos.