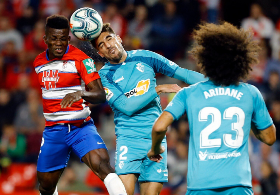 Super Eagles midfielder Ramon Azeez helped in preserving Granada's lead over Osasuna Friday night in the first match of Match Day 9 in the Spanish La Liga which ended 1-0 in favour of his team.

Azeez who was in action on Sunday when Nigeria held Brazil to a 1-1 draw in their international friendly match in Singapore came off the bench on Friday to replace Roberto Soldado in the 59th minute.

"The substitution made by Diego Martinez were spot on. Ramon Azeez provided energy, provided stability. They pressed well denying Osasuna any chances of scoring.

"Azeez's passes were incisive as well. He had a good game," Lee noted.

For Andrea Orlandi, Azeez has been instrumental in Granada's fine run in the 2019/2020 season.

"Azeez is having a good season at Granada. I mean Soldado was upset leaving the pitch but what Azeez offered the team tonight was there for all to see," the analyst stressed.

Soldado was apparently unhappy when substituted off for Nigeria international Azeez albeit cast a jovial look afterwards as he shared a joke with a teammate on the bench.