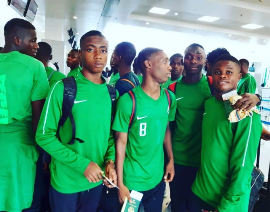 FIFA has confirmed Nigeria's finalized roster for the 2019 U17 World Cup which begins in Brazil on October 26.
The Golden Eaglets have qualified for 12 of the eighteen tournaments and are the most successful team with five wins.
Allnigeriasoccer.com has compiled six interesting observations about the squad :
1) As at Saturday, October 19, the average age of the squad is 16.2 years. The roster features six 17-year-olds, thirteen 16-year-olds and two 15-year-olds. The oldest player is Olakunle Olusegun at 17 years, 5 months and 26 days and the youngest is Abba Bichi at 15 years, 9 months and 22 days.
2) Standing at 172cm, West Ham's Daniel Jinadu and Dabo Babes' Ibrahim Said are the tallest players in the squad.
3) Nineteen players represent local clubs while two are based internationally in England; goalkeepers Jinadu and Joseph Oluwabusola.
4) Manu Garba is attending his third World Cup, two as the chief coach of the team. He won gold medals in 2007 and 2013.
5) Eleven players were part of the Golden Eaglets roster to the U17 AFCON in Tanzania : Sunday Stephen, Samson Tijani,Clement Ikenna, Olakunle Olusegun, Wisdom Ubani, Akinkunmi Amoo, Charles Etim, Peter Agba, Divine Nwachukwu, Ibraheem Jabaar, Joseph Oluwabusola
6) Giant Brilliants FC have contributed the most players (2) to the squad in Wisdom Ubani and Usman Ibrahim.
Ifeanyi Emmanuel