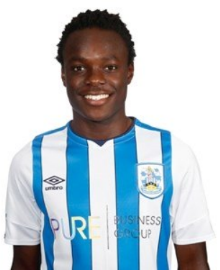 Manchester City are mulling over a move for highly-rated Nigerian winger Andrew Ijiwole, allnigeriasoccer.com understands.
The Citizens have handed a trial to the Huddersfield Town starlet with a view to a transfer as from the January transfer window, and U18s boss Gareth Taylor ran the rule over the 2001-born player during Friday's 4-1 rout of Stoke City in the U18 Premier League.
Ijiwole played the last 12 minutes against the Potters, coming on as replacement for Alex Robertson.
Manchester City are taking another look at him again after he impressed in a friendly against the club whilst playing for Huddersfield Town U17s in 2018.
In August 2019, Huddersfield Town loaned the 18-year-old to BetVictor Northern Premier League Division One North West team Ossett United on work experience.
Ijiwole arrived Huddersfield in the summer of 2018 after spells with the youth teams of Southampton and Queens Park Rangers.
Samuel Edozie provided two assists as City secured their seventh league win this term against Stoke City.
Ifeanyi Emmanuel
Photo Credit : htafc.com