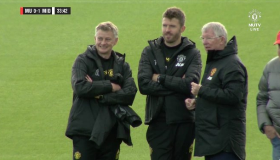 Nigeria-eligible prodigy Dillon Hoogewerf made yet another start for Manchester United U18s as they were held to a 1-1 draw by Middlesbrough U18 in an U18 Premier League fixture on Saturday afternoon.
Fresh from making his competitive debut for the Dutch U17 squad in the second international break of the season, Hoogewerf led United's attack with England U16 captain Shola Shoretire playing behind him from the off.
Former Manchester United coach Alex Ferguson, current first team boss Ole Gunnar Solskjaer and Michael Carrick were at Trafford Training Centre in Carrington to run the rule over some of the promising youngsters in the academy.
Boro's Isiah Cornet curled a great strike into the top corner from the edge of the box to open the scoring in the 24th minute.
Hoogewerf caused all sorts of problems for the Boro defence, especially in the second half, and they had to repeatedly resort to fouling the striker to limit the damage he was causing.
With ten minutes remaining, Anthony Elanga scored a deserved equaliser for the home team with Ayodeji Sotona, who replaced Shoretire in the 63rd minute, involved in the build-up to the goal.
The 16-year-old Hoogewerf has scored three goals in 8 league games for Manchester United U18s, and was on target against Slovenia in an U17 EURO qualifier on October 15.
Ifeanyi Emmanuel
Photo Credit : manutd.com