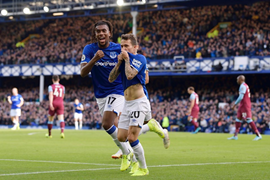 Goals from Bernard and Gylfi Sigurdsson earned Everton a deserved 2-0 victory over West Ham United at Goodison Park on Saturday afternoon, the Toffees first win in five Premier League matches.
Nigeria international Alex Iwobi was in action for 87 minutes before he was replaced by the Iceland playmaker.
The number seventeen came close to doubling the advantage at minute 77 but his effort was blocked brilliantly by Roberto.
Although the Super Eagles star didn't get on the scoresheet, he was praised by ESPN journalist Roger Bennett, who likened him to Everton legend Tim Cahill.
He posted on Twitter : ''Huge win propelled by this man, Alex Iwobi, who has all the making of an Everton cult hero in the mould of Tim Cahill.
''100% Commitment, Tenacity and Heart. Sometimes it works. Sometimes it doesn't. But always All In. Ready to make every moment matter 🙌''.
The Super Eagles star completed more final third passes than any other player on the pitch between Everton and West Ham, with 20 final third passes attempted and 18 final third passes completed, and two directly leading to a shot.
Timothy  Dehinbo
Photo Credit : evertonfc.com