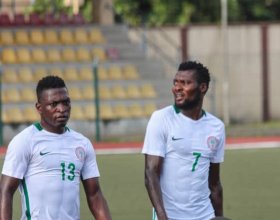 Nigeria's flag will not be hoisted in Cameroon January 2020 as the home-based Super Eagles defeated Togo 2-0 in the reverse leg of their qualifier losing out 4-3 on aggregate following the 4-1 away defeat in Lome.

Sikiru Alimi was the scorer of both goals for the Eagles at the Agege Stadium, Lagos on Saturday evening.

The Eagles mounted early pressure on the Togolese which paid off in the 8th minute as Sikiru Alimi paid Nigeria ahead.

Alimi went close to doubling the advantage but his effort was saved by the Togolese goalkeeper in the 19th minute.

The resourceful Alimi ten minutes later saw his shot saved again four minutes after what could have been his brace was cleared off the line.

Ndifreke Effiong saw his free-kick close to the visitors' box go inches wide off target in the 39th minute while Mohammed Sunusi's header off a long throw by Daniel James in the 45th minute went a whisker close to narrowing the goal aggregate.

Alimi got his brace in the 72nd minute but that was as much as the Eagles could get as Togo triumphed in the end.