...the complete Nigerian football portal
Subscribe
'Should Be In Next U21 Squad, Unless He's Set On Nigeria' - Fans Praise QPR's Eze After Brace
Published: October 19, 2019 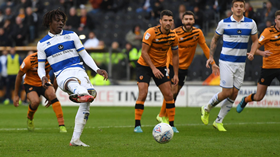 Former Super Eagles invitee Eberechi Eze was praised by the media and fans after his sensational display for Queens Park Rangers as they registered a 3-2 win against Hull City at the KCOM Stadium on Saturday afternoon.
The attacking midfielder won and converted two penalty kicks in ten second half minutes to seal the win for Queens Park Rangers and in doing so took his tally for the season to 6 goals in 12 league appearances.
Eze's performance against Hull City was very eye-catching and he is being tipped to move to a Premier League club in the near future while another fan has backed him to get an England U21 call-up if he doesn't switch his allegiance back to Nigeria.
Reflecting on Eze's performance, here are some of the best reactions on Twitter :
@EvanDraycott : ''Eberechi Eze from QPR is some player''.

@chrisbt45 : ''Ebere Eze and Mark Warburton are taking us to the premier league baby🕺🕺''.

@WindyCOYS : ''Eze should be on a lot of Premier League clubs' shopping lists this January (and should have been for about 18 months) but for his own development he should absolutely stay with QPR.''

@RowdenJRSG : ''Eze (98) having himself a season. Almost unprecedented at his age in the Championship. Will be tough to carry this workload for 46 games, but talent is in no doubt. Should be in next U21 squad, unless he’s set on Nigeria.''

@qprduncan : ''In @EbereEze10 we have some player! Joy to watch and another excellent #QPR number 10. #talent #eze #Ursss''

@TQPRBermingham : ''...No point trying to find any words for Eze, the skill and power to win those two pens. Different class.''

@Yousef_QPR : ''Another great win. Eze was exceptional roday. Sorry, but I would bring Lumley back in goal. #HULQPR #QPR''.

@Ben_F98 : ''Eberechi Eze unreal again today not just his goals going forward no one better in the league''.

@1_DanKemp : ''Poor performances across the board from #hcafc compounded by the magic of Eberechi Eze and his one man show #QPR''.

@SimonPeach : ''Hull 2 QPR 3 - Eze for the Rs in the end, with Ebere's quality the difference. Can't believe how bad City looked after the break''.

@Mashwoody : ''Impressive match stats to go with the win. Outstanding stuff. Strength in depth and real confidence. On this form will Eze and Manning be at QPR in the new year?''

@MMMcNabb : ''4th away win of the season for #QPR! Solid overall team performance and a masterclass from Eze.''