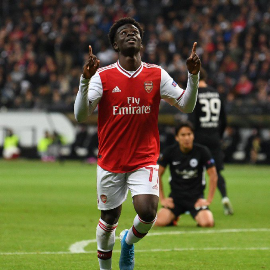 Arsenal youngster with Nigerian heritage Bukayo Saka  has unequivocally stated that he is not ready to give up his starting place in the Arsenal line up despite the imminent return to fitness of superstar striker Alexandre Lacazette.

Saka has earned the trust of head coach Unai Emery and impressed of late especially in the Cup games.

"Do I feel ready to challenge him? Yeah!," Saka was quoted as saying by football.london when asked about the potential 'battle' for a starter's place with Lacazette.

"It's always good to have all our best players available, all of us competing makes us push to play better and better.

"If one player is injured then others get an opportunity but I want everyone to come back and do the best for Arsenal.

Saka who had scored once and assisted thrice in the Premier League appreciated the fact that Emery believes in his qualities and vowed to offer his best whenever fielded.

"The boss knows what I can do, what the other players can do. Different games require different players but I feel like I've shown the boss he can trust me. Whatever game he puts me I'll always give it my all.

"It has always been a dream for me. I've been working for this moment as a kid, in the academy. Now I've got to the first team I just want to give it my best to repay the faith the boss has given me."

The forward who prefers to be called a Nigerian rather than 'British Nigerian' talked about the impact of his teammates to his development.

"I just try to go out there, do my best, play without fear and doubt. If the boss trusts me to do it I can do it.

"I don't feel the pressure. I try to go out there and not think about the outcome, just focus on the things I can control. Even if things aren't going well I just work hard and the game will take care of itself," Saka stressed.

Saka is in contention to start Monday night against Sheffield United in the Premier League and Thursday's Europa League clash against Vitoria Guimaraes.