...the complete Nigerian football portal
Subscribe
'He Was Rightly Booked For That' - Arsenal Icon Has His Say On Saka's Yellow Card Vs Sheffield Utd
Published: October 21, 2019 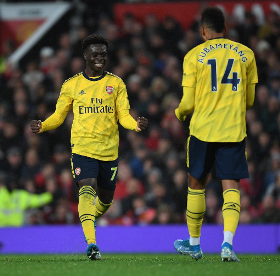 Arsenal threw away the opportunity to regain third position in the Premier League standings following their 1-0 loss to Sheffield United at Bramall Lane on Monday night.
The Gunners had a big shout for a penalty in the 35th minute, five minutes after The Blades went in front through Lys Mousset, but referee  Mike Dean booked Bukayo Saka for diving.
Speaking after the game shown live on Sky Sports, BBC Sport pundit Ian Wright backed the referee for booking Saka for simulation as no contact was made by the Sheffield United player in the penalty box.
The Arsenal legend said : ''When you see it from the other angle there is no contact, nothing. He's actually started to jump before... he is young he'll learn from that.

''He is waiting for the contact, that's what everybody does now but he didn't get any, so he was rightly booked for that''.
Saka has started the last four matches contested by Arsenal in the Premier League and was also named in the starting line-up against Eintracht Frankfurt in the Europa League.
Ifeanyi Emmanuel
Photo Credit : arsenal.com