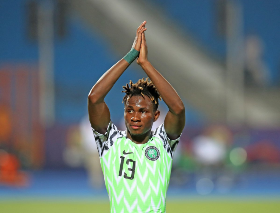 Nigerian international Samuel Chukwueze has been nominated for the prestigious Kopa Trophy award for 2019.
The award is specifically meant for the best of the U21 players in world football and the 20-year-old has earned the recognition on the back of his dazzling displays for club and country.

Paris Saint Germain star Kylian Mbappe scooped the award for the first time ever last year, beating off the likes of Chelsea's Christian Pulisic and AS Roma's Justin Kluivert and Chukwueze will now look forward to joining an elite group, if he is successful.

He dazzled for Nigerian at the 2019 AFCON tournament in Egypt, helping them to win bronze while his performances in the Spanish La Liga for the Yellow Submarine since breaking into the senior team last year have been nothing short of sensational.

The winner of the Kopa Trophy will be announced at an event which will hold on December 2.