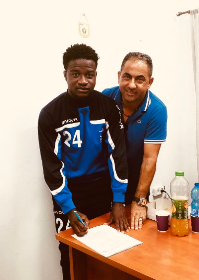 Allnigeriasoccer.com understands that Israeli Liga Leumit side Hapoel Nof HaGalil have won the race for the signature of exciting Nigerian midfielder Araphat Abubakar.
The 18-year-old has signed a one-year deal with Hapoel Nof HaGalil following a successful medical.
Abubakar trailed at Galatasaray in August 2019 but the Turkish champions passed up the opportunity to sign him.
He was supposed to join Swedish club Kalmar but they were too slow to offer him a contract.
The attacking midfielder's representative advised him to ink a short-term deal with Hapoel Nof HaGalil because the plan is for him to move to a European club at the end of the 2019-2020 season.
English clubs Wigan Athletic, Barnsley and Burnley had explored the possibility of acquiring Abubakar but couldn't sign him due to Football Association's work permit rules.

The teenager previously wore the colours of Westerlo and MFM.
Ifeanyi Emmanuel