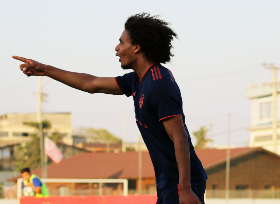 Bayern Munich's Nigeria-eligible striker, Joshua Zirkzee was at his predatory best for the Bavarians as they thrashed Olympiakos Piraeus 4-0 at the Proponitiko Kentro Reti stadium on Tuesday afternoon.

The Netherlands youth international scored an impressive treble in Athens, thus taking his goal tally in the tournament this season to four in just two games.

He opened the floodgates after 35 minutes of action off an Angelo Stiller's assist before adding another two in the 51st and 74th minutes.

Zirkzee was on song for his team on October 1st against Tottenham in their second group game and has now contributed to eleven goals (eight goals and three assists) in his last six UYL games.

Aged just 18, he is inching ever closer to his senior team debut as he is one of the club's top performers in the reserves week in week out.