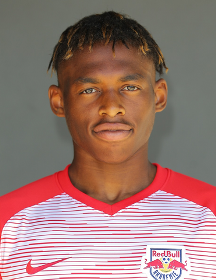 Kano-born striker Chukwubuike Adamu opened his goalscoring account in the UEFA Youth League as Austrian club Red Bull Salzburg hammered Napoli 7-2 at the DAS.GOLDBERG Stadion (Grödig) on Wednesday afternoon.
Adamu came off the bench in the 63rd minute and a minute later he extended the lead over the Italian team.
Central defender Bryan Okoh, who is eligible to represent Nigeria, Switzerland and United States, was named in Red Bull Salzburg's starting line-up along with Germany youth-teamer of Nigerian parentage Karim Adeyemi.
Napoli's Costanzo opened the scoring in the 7th minute only for Sesko to level matters a minute later assisted by Adeyemi, who was taken off in the 20th minute after suffering an injury.
The Austrians led 2-1 at the interval thanks to Sesko's 14th minute goal, his second of the game.
In the second half, Anselm, Luis Phelipe, Sučić and Seiwald also registered their names on the scoresheet for Salzburg, and Vrikis pulled a goal back when he converted a spot kick.
An Austria U18 international, Chukwubuike Adamu has tallied over 50 goals for Red Bull Salzburg's youth teams since the start of the 2016-2017 season.
Ifeanyi Emmanuel
Photo Credit : redbulls.com