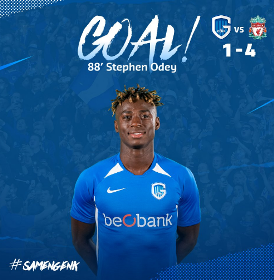 Racing Genk striker Stephen Odey has reacted to opening his goalscoring account in the UEFA Champions League in yesterday's clash against defending champions Liverpool.
The Nigeria U23 international had to settle for a place on the substitutes bench but was introduced in the 81st minute as replacement for Paul Onuachu.
Seven minutes into his Champions League debut, Odey fired a late consolation for the Belgian champions.
On Thursday, he dedicated the goal to someone very close to his heart and rued the loss to Liverpool.
Writing on Twitter, Odey said : ''Not the result we wanted but it ended that way. Hoping to get a better result in our next meeting & a goal.💪⚽⚪🔵.

''I will like to dedicate my first @ChampionsLeague goal to my mum who marked her birthday on Tuesday as a birthday gift 🎂. Thanks for guiding me in the right path.''
Odey was not in the matchday 18 when Genk faced Red Bull Salzburg and Napoli in their first two group matches.
Ifeanyi Emmanuel
Photo Credit : krcgenk.be