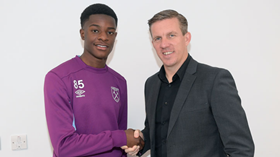 Through a statement on their official website, Premier League club West Ham have announced the signing of Nigerian striker Mipo Odubeko.
The 17-year-old is joining the Hammers as a free agent after opting not to sign a scholarship with Manchester United at the end of last season and had been linked with a plethora of top clubs in Europe.
He scored 35 goals and netted on his debut for Manchester United in the U18 Premier League last season.
Odubeko will now continue his development at West Ham's Academy of Football and will initially play for the club's U18 team.
''It’s a really exciting day. I’ve been waiting for this move for a while, so I’m looking forward to getting started,'' Odubeko said.

''West Ham is a club with a lot of history behind it. It promotes its young players, so it’s a great opportunity for me to develop my game and help the team.

''I’m looking forward to moving to London – it’ll be a little different to Manchester, so it’s an exciting challenge.''
Mipo played for St Joseph's Boys Football Club in Dublin, Ireland before relocating to England with his parents in August 2015 on the invitation of Manchester City.
Ifeanyi Emmanuel
Photo Credit : whufc.com