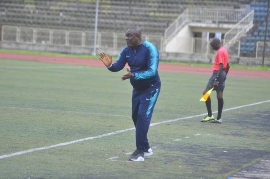 Ahead of Warri Wolves' clash with Akwa United, the technical adviser of the team, Evans Ogenyi, has said that every team is capable of getting the desired results in the new season, saying that no team is a pushover now.


Speaking in an exclusive interview, Ogenyi stated that any team that could translate its concepts into reality would take care of any situation on the pitch.
He noted that craze for some teams to use big stars to intimidate opponents shows sheer ignorance, as names do not play football.

"We're talking about functions here," Ogenyi stated. "How you can translate the concepts given to you into reality."

On the league opener on Sunday against Akwa United at home, the Benue-born tactician said his side would be weary of the Promise Keepers, saying that the Uyo club likes playing midfield football with their lethal front line.

He described Akwa United head coach, John Obuh, as a brilliant gaffer and a friend, who loves to attack one on the pitch relentlessly for 90 minutes.

The Seasiders would formally return to the top flight after about four years in the Nigeria National League, NNL, with a titanic home game against Akwa United.