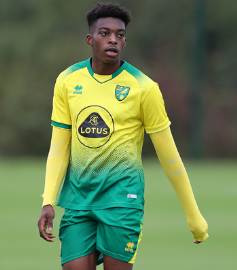 On Saturday afternoon, the striker who scored a brace against Sunderland last week took his tally in two U18 Premier League games to three with yet another goal when he scored in a goal-laden affair versus Fulham.

On the stroke of halftime, Jabon Warner set up Omotoye who beat the Fulham offside trap to slot past Mac Chisholm and make the scoreline 3-3 at Motspur Park.

That said, the club's youth manager Paul Williams has handed the starlet eight starts from their nine games this season, a pointer to his trust in his qualities.

On the back of such form, it is envisaged the striker who has made himself available for Nigeria's youth teams could be getting a look in with the Canaries U23 side any time soon.