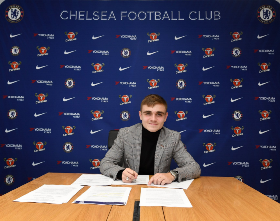 Combative midfielder Lewis Bate has been rewarded with a new deal by Europa League holders Chelsea.
Bate has taken to social media to announce that he has signed his first professional contract with Chelsea without disclosing the length of his new deal.
The 2002-born player has confirmed inking a pro deal four days after celebrating his seventeenth birthday.
Born in Sidcup, he joined The Blues as an U9 and progressed through the ranks before making his debut for the U18 team against Arsenal in May 2018.
Last season, Bate appeared in five games in the U18 Premier League and has played seven times for the youth teams this term, including against Valencia in the UEFA Youth League.
The 17-year-old has represented England at U17 and U18 levels.
Igho Kingsley
Photo Credit : Twitter.com/Lewbate