...the complete Nigerian football portal
Subscribe
Golden Eaglets Star Pays The Price For Pledging Future To Nigeria As He Is Released By Bournemouth
Published: November 03, 2019 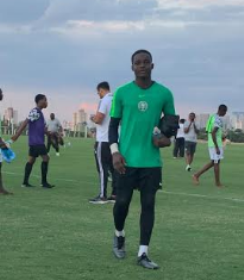 Allnigeriasoccer.com understands that Golden Eaglets goalkeeper Joseph Oluwabusola has paid the price for committing his international future to Nigeria after he was released by Premier League club Bournemouth.
The 2003-born glovesman has been listed as a player of Bournemouth by the Nigeria Football Federation at the ongoing U17 World Cup in Brazil but in reality he has not been on the books of the Cherries since July 2019.
Bournemouth opted not to offer Oluwabusola a scholarship because they could not properly assess him due to his frequent trips to Abuja to train with the Golden Eaglets since 2018.
The 16-year-old was in Abuja for several weeks training with the Nigeria U17s before traveling with the team to Niger for the WAFU-UFOA Zone B qualifiers for the Africa U17 Cup of Nations and was also absent from Bournemouth during the U17 AFCON in Tanzania.
Oluwabusola finally made his competitive debut for Nigeria in the Golden Eaglets 2-1 loss to Australia on Friday and gave a good account of himself despite conceding two goals.
Some Premier League clubs including Watford are understood to be mulling over a move to sign the free agent.
Ifeanyi Emmanuel