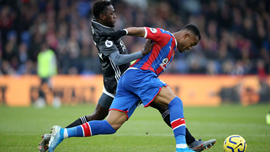 Leicester City have returned to third place in the Premier League following their 2-0 road win against Crystal Palace on Sunday afternoon thanks to goals from Caglar Soyuncu and Jamie Vardy at Selhurst Park.
A selection of Arsenal supporters have praised the performance of Nigeria international Wilfred Ndidi, who went the distance for the Foxes for the tenth time in the Premier League this term, and have urged the Gunners to make a move for his services.
Ndidi finished the game against the Eagles with a game-high eight successful tackles while the rest of his Leicester City teammates managed fifteen in total., according to stats from football statistics experts Whoscored.com.
Here are some of the reactions on Twitter regarding the performance of the number 25 :
@osahon_efe : ''What's the point following Arsenal when you can comfortably enjoy Wilfred Ndidi and Leicester City. #CRYLEI''.

@lumie_olu : ''Why #Arsenal have not picked up Wilfred Ndidi of @LCFC. I will never understand. #CRYLEI''.

@don_cross_AFC : ''Ndidi could join Arsenal and start playing no. 10 under Emery.''

@DF_Arsenal2 :''Wilfred Ndidi won 8 tackles at Selhurst Park. He’s a monster of a player. He’s averaging 5.3 tackles, 3.2 interceptions and 2.1 clearances per game. Phenomenal stats. Arsenal should go all out for the man. Ndidi next to Guendouzi would be incredible.''

@AlekeMukunga : ''I would tell Rodgers...soon after the match...come to The Arsenal and come with Ndidi (Ramsey-like) and any other you want.''

@AndrewJr07 : ''Sometimes i wonder why big clubs aren’t fighting for Ndidi, would take him at Arsenal in a flash''.

@i_amdipo : ''Arsenal should just get Ndidi or Maddison''.

@jesse_siri : ''Tierney and Pepe still finding their feet, you can't compare them to what Leicester have got. About Bellerin, you have short memory or choose to ignore his lapses, he's not on the same level with Perreira... Ndidi is miles ahead of Torreira..''

@kingubong : ''Happy Birthday @UnaiEmery_ . Wish you all the best and hope you get Guendouzi to watch how Leicester Ndidi gets involves in tackles, commands and shields the back 4 since u prefer him to LucasT. We deserve to be happy too!!''

@TheIrishGooner2 : ''Auba>vardy no chance the other way round ozil better than maddison. nDiDi Is bEtTeR tHaN aNy ArSeNaL dm’ mate i think your a bit bias there''.