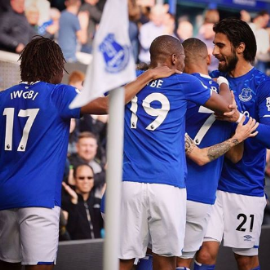 Portugal international Andre Gomes faces a long spell on the sidelines after breaking his ankle during Everton's Premier League match against Tottenham Hotspur at Goodison Park on Sunday afternoon.
The central midfielder suffered a horrendous injury following a tackle by Spurs striker Son Heung-min and was stretchered off the pitch while the South Korean was sent off after referee Martin Atkinson consulted the VAR.
Gomes, a 2016 European Championship winner, underwent surgery to repair a fracture dislocation to his right ankle on Monday and the procedure went extremely well, according to Everton's official webpage.
Super Eagles star Alex Iwobi was in the Everton side held to a 1-1 draw by Tottenham Hotspur and the winger had seen firsthand the injury suffered by his teammate.
The Everton number 17 has sent a message to Gomes and is backing the Portuguese to come back stronger.
Writing on Instagram, the former Arsenal star said : ''Wishing You A Speedy Recovery Bro , You’ll Be Back Stronger 🙏🏾💙 @aftgomes21''.
Iwobi has played alongside Gomes six times in the Premier League this season and once in the League Cup.
Ifeanyi Emmanuel
Photo Credit : evertonfc.com