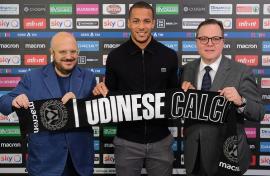 Nigeria international William Troost-Ekong has extended his contract with Udinese till the summer of 2023, the Italian Serie A club have informed via their official website.


Troost-Ekong, 26 joined the Udine-based club in August 2018 from Bursaspor and has gone on to become an important player for the the Bianconeri.
This season, he has played nine of his team's eleven league games so far, helping them to sit 12th on the standings.

"That of William is an important renewal because he is a player of great value and charismatic for the locker room,'' said the manager of the technical area Pierpaolo Marino.

''It is an important message that shows how the players are doing well here in Udine.

''It is important to have a similar relationship with players who feel that they are connected to the cause.

''Thanks to the Pozzo family, which allows us to carry on great empathy with our players in everyday life.''

He is expected to be named in Luca Gotti's starting lineup for his team on Sunday when they face SPAL in a league game.

The former Tottenham youth-teamer has played a total of 45 games for the club in all competitions since arriving the Dacia Arena from Turkey.