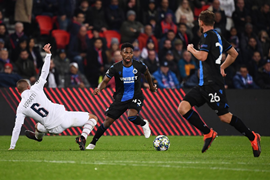 Club Brugge winger cum striker Emmanuel Dennis is being linked with a transfer to Premier League side Leicester City in the January transfer window.
Providing an update on the situation of the Nigeria international, Voetbal 24 claims that Club Brugge would prefer not to sell Dennis before the end of this season but the Foxes are still pushing to sign the striker when the transfer window reopens.
Manager Brendan Rodgers sees Dennis as an ideal replacement for the aging Jamie Vardy or a strike partner of the former England star.
It has been suggested that the King Power Stadium outfit are preparing a bid in the region of 25 million euros to acquire him from the Belgian First Division A side.
Club Brugge signed Dennis from Ukrainian club Zorya Luhansk in the summer of 2017 and he has gone on to score 25 goals in 87 matches, including a brace against Real Madrid in the Champions League, with nine assists to his name.
The 21-year-old penned a contract extension in September 2019 tying him to Club Brugge until the end of the 2021-2022 season.
Igho Kingsley
Photo Credit : uefa.com