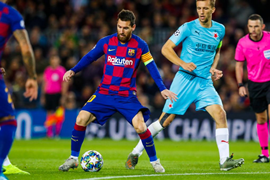 Nigeria international Asisat Oshoala took to social media to criticize Lionel Messi and co. during their disappointing goalless draw with Slavia Prague in a Champions League clash on Tuesday.
According to Barcelona-based sports daily Mundo Deportivo, the Super Falcons star complained that Barcelona were not seeing much of the ball but she quickly deleted thE tweet to avoid being disciplined by the club and face the wrath of supporters.
''Keep the bloody ball!'' Oshoala advised the Barcelona players during the match at the Camp Nou.
Oshoala went on the praise Slavia Prague's Super Eagles striker Peter Olayinka, who was full of running, for his performance against Barcelona, tweeting : ''Peter no Dey tire 🙄🙄🙄🤷🏾‍♀️🤷🏾‍♀️#BARSLP''.
Her tweet in support of Olayinka was still active as at the time of filing this report.
After eight games in the Spanish Primera División Femenina, the former African Women's Footballer of the Year and three-time AWCON winner is the second highest goalscorer in the division with seven goals, only behind Barcelona teammate Jenni Hermoso.
Ifeanyi Emmanuel
Photo Credit : fcbarcelona.com