...the complete Nigerian football portal
Subscribe
Ivory Coast To Name Only 3 Outfield Players On The Bench Vs Nigeria U23; Chelsea GK Could Debut
Published: November 07, 2019 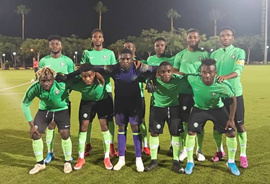 Nigeria's first opponents at the 2019 U23 Africa Cup of Nations, Ivory Coast will be without several of their players in both countries opener in Egypt.
According to Sport Ivoire, five Ivorian players named to the 21-man roster have not yet reported for international duty and will miss the Group B opener against Nigeria on November 9.
The five players are all outfielders, namely Captain Ibrahim Sangaré (Toulouse FC), Junior Ahmed Traore (Sassuolo), Drissa Doumbia (Sporting Lisbon), Jonathan Cisse (Hapoel Hadera) and Anderson Niangbo (Wolfsberger AC).
The aforementioned players did not participate in the training camp held in Morocco because they were not released by their UEFA-affiliated clubs and will join the team before the second group game against South Africa.
It means only five players, including two goalkeepers and three outfielders, will be on the bench against the Dream Team VII.
Meanwhile, Chelsea starlet Nicolas Tié has reported for duty and is in contention to make his international debut for Ivory Coast on Saturday.
The Ivorian Football Federation are planning to fast-track the French-born goalkeeper into the senior team and handed a call-up to the 18-year-old for the U23 AFCON.
Meanwhile, it is confirmed that Nigeria U23 coach Imama Amapakabo will not be able to count on captain Azubuike Okechukwu and Taiwo Awoniyi until after their first game in the group stage.
Ifeanyi Emmanuel