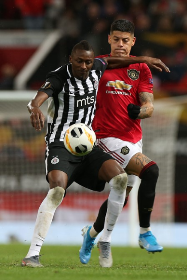 Catch up on the Nigeria international players in action for the respective clubs on match day four in the Europa League on Thursday, November 7.
In a Group G clash at the Ibrox Stadium, Rangers beat Porto to move three points clear of the former European champions thanks to goals from Morelos and Davis.
Super Eagles midfielder Joe Aribo came on in the 83rd minute for his 22nd appearance of the season in all competitions.
Anthony Nwakaeme has now contributed to 7 goals (3 goals, 4 assists) from 18 games in all competitions after scoring a consolation for Trabzonspor in a 3-1 loss to Krasnodar in a Group C match at Stadion FK Krasnodar.
Introduced off the bench in the 65th minute, Nwakaeme collected possession on the left  and cut into the area to fire low across Safonov and inside the far post, his ninth European goal in 38 matches.
In a Group J clash at Stadion Graz Liebenau - Graz, Istanbul Basaksehir went top of the group after thrashing Austrian opponents Wolfsberger AC 3-0.
Nigeria international Azubuike Okechukwu started and was in action for 89 minutes.
Visca opened the scoring when he converted a spot kick in the 73rd minute before Crivelli added two late goals for the visitors.
Uche Agbo was not in Sporting Braga's matchday 18 vs Besiktas at Estádio Municipal de Braga . The Portuguese team ran out 3-1 winners.
Paulinho netted a brace for Braga in the first half and Wilson Eduardo added a late third while Boyd scored for the Turkish side.
Let's go to Old Trafford in England. Manchester United thrashed Partizan Belgrade 3-0 to seal their qualification to the round of 32, with Greenwood, Martial, Rashford all on target for the Red Devils.
Dream Team VI striker Sadiq Umar played for 86 minutes but could add to his Europa League tally of two goals.
Ifeanyi Emmanuel
Photo Credit : uefa.com