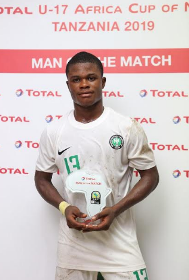 Allnigeriasoccer.com understands that several glamorous European clubs are fighting for the signature of 'Golden Eaglets Messi', Akinkunmi Amoo when he attains the age of majority.
Amoo was unarguably the Golden Eaglets best player at the 2019 FIFA U17 World Cup, providing at least one assist in each of his last three starts, before the national team exited the competition on Wednesday morning.
Despite his impressive performances in Brazil, Amoo who is seen as a player with immense potential, was not at his best because of coach Manu Garba's tactics and he didn't get enough support from his teammates.
La Liga clubs Real Madrid, Valencia and Atlético Madrid are his suitors in Spain while Bayern Munich and Borussia Dortmund are the German clubs plotting a move to sign the attacking midfielder.
Former European champions AC Milan and Ajax Amsterdam are in the race to sign the Sidos Academy wonderkid, and Paris Saint-Germain are also in the mix to sign the precocious talent.
Though the likes of Arsenal and Manchester City have scouted Amoo, Leicester City have shown the most interest in him, however, they are not the favorites to sign the versatile midfielder.
Ifeanyi Emmanuel
Copyright ANS.