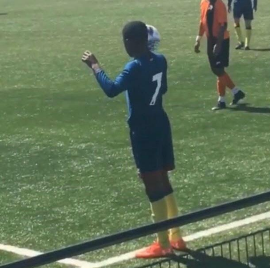 Promising Nigerian youngster Joseph Johnson was impressive as West Ham U15s thrashed Arsenal 6-2 in a Floodlit Cup clash staged at Arsenal Training Ground on Thursday night, allnigeriasoccer.com reports.
The winger, who has been likened to Crystal Palace star Wilfried Zaha, restored parity for the Hammers after the young Gunners took the lead.
He received a pass from near the center circle, then made a run into the penalty area with Arsenal defenders chasing him in vain before firing past the goalkeeper.
Johnson terrorised the Arsenal defence throughout his duration on the pitch and provided an assist in the first half.
He came off early because he has been promoted to play with West Ham U16s against Leicester City on Saturday, November 9.
With Johnson's strike against the North London club, he has been involved in 28 goals (18 goals, 10 assists) for West Ham's youth teams this term.
The 2005-born player has pledged his international future to Nigeria and is targeting a call-up to the country's U15 National Team, Future Eagles.
Ifeanyi Emmanuel