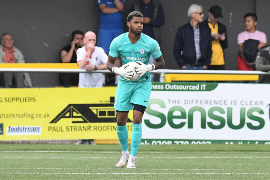 Ivory Coast U23 manager Soualiho Haïdara will be forced to make do with a depleted team when his side face Nigeria in their opening Group B game at the 2019 AFCON on Saturday.
Due to the unavailability of a number of the team's stars, the Elephants will be relying on the likes of Genoa's Christian Kouamé, Chelsea's Nicholas Tiè and a handful of others to get past their opposition.

Below are the top three players the team have in camp for selection,

Christian Kouamé: Imama Amapakabo's defenders can ill-afford to take their eyes off Kouamé on Saturday, as the Genoa striker is one of the deadliest in the Italian Serie A.

Before reporting for national duty, Kouamé has already tallied five goals and two assists for his club in just eleven appearances this season, including a brilliant goal against a certain Juventus.

Aboubakar Keita: The OH Leuven midfielder is expected to run things from deep for the team and his profile suggests he is one of the players his team will be banking on against Nigeria.

His discipline remains a big question mark though, as their seems to be a certain petulance to his style of play, a chink in his armoury which could be exploited.

Nicholas Tiè: Having honed his skills with Premier League giants Chelsea, Tiè is expected to bring some level of finesse and composure to the team, and how he performs against the Dream Team could prove pivotal for his team.


The teenage goalkeeper has been a top performer for the Blues reserves since his emergence and has played in the UEFA Youth League this season.
Emmanuel Chinaza
Photo Credit : Twitter.com/TieNicolas