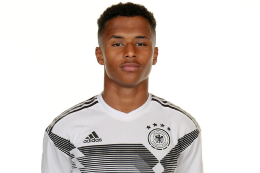 Two Premier League clubs are interested in signing Red Bull Salzburg's Nigeria-eligible striker Karim Adeyemi, according to reports.
Kleinezeitung making reference to Kronen Zeitung reported on Friday that Liverpool and Arsenal are competing with La Liga giants Barcelona for the signature of the super talent who is only seventeen years old.
The Austrian newspaper says Red Bull Salzburg have rejected a proposal from Barca to acquire the Germany youth international despite the prospect of receiving around 15 million euros.
"A sale is currently not an issue for us," Red Bull Salzburg sporting director Christoph Freund said.
Born in Munich, Adeyemi received the highest individual award in German youth football in September when he was
honored with the Fritz Walter Medal in Gold as the best U17 junior player.
The striker has been on the books of Red Bull Salzburg since the summer of 2018 after transferring from SpVgg Unterhaching n Germany and currently plays for feeder club FC Liefering in the Second League.
In 13 outings for Red Bull Salzburg teams in the current season, Adeyemi has been involved in 12 goals (7 goals, 5 assists).
Ifeanyi Emmanuel
Photo Credit : dfb.de